Dr. Abner Landrum spent many years in efforts to better the way of life for the citizens of South Carolina. In the process, he saved hundreds of thousands of lives across the entire tier of southern states. Dr. Landrum was an enlightened and educated physician, born in the Edgefield District of South Carolina in 1785 To Samuel B. and Nancy S. Landrum.

Perhaps foremost in Dr. Landrum’s accomplishments was unlocking an ancient Chinese method of stoneware pottery production. Abner made his older brothers partners in his grand pottery experiment. Abner, the Reverend John and Amos Landrum set about experimenting in the production of stoneware pottery as early as 1800. Dr. Landrum had undoubtedly seen the effects of the deadly plague affecting many of the Carolinians of his time; lead poisoning.

A lead-glazed redware or "dirt dish"

The population of the late 1700’s and early 1800’s used a type of earthenware pottery which was sealed with a clear lead glaze. They not only ate off of these plates known as “dirt dishes” but pickled and preserved foodstuffs in large containers made of the same. It was realized by that lead was the culprit in this form of poisoning and that acids (vinegar) seemed to accelerate the process. Since much of the food at that time was preserved by pickling, there were undoubtedly many sick patients, many of them children, whom Dr. Landrum saw. Salt glazing pottery was used in other parts of America, but was a scarce commodity in the south and was desperately needed for food preservation. 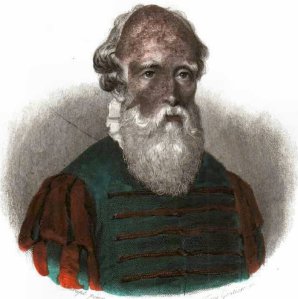 As an educated and well to do man, Dr. Landrum possessed a library and apparently an extensive one. He seems to have read the autobiography of the famous French ceramicist Bernard Palissy (1510-1589) and read of his valiant but failed attempts at re-creating Chinese porcelain. The closed society of China at that time obviously held great allure for Dr. Landrum.

Palissy’s experiments lit a fire in Landrum’s inquisitive mind. He named his fourth child Palissy in honor of the French ceramicist he held in such esteem. Another child of his was named Wedgewood in honor of the famous English ceramicist. Yet another of his children, Manises, was named after the town near Valencia, Spain which was the birthplace of another important ceramic tradition: Majolica or Lusterware. Dr. Landrum had a deep, life-long interest in ceramics. 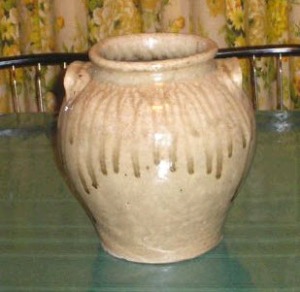 Armed with the scant information available, Dr. Landrum and his brothers created the first alkaline-glazed stoneware pottery in the New World, combining the techniques of Europe and Asia, and creating a viable alternative to the lead-leaching dirt dishes.

All materials needed for the production of this high-fired stoneware were obtained locally. The fall line around the Edgefield District held kaolin clays which were capable of being fired to very high temperatures. By mixing a solution of ashes from the firebox of the pottery kiln, sand and clay together, Landrum discovered the secretive formula for creating alkaline-glazed, high-fired stoneware. Landrum and his relatives set about creating some of the first, true, factories in South Carolina. 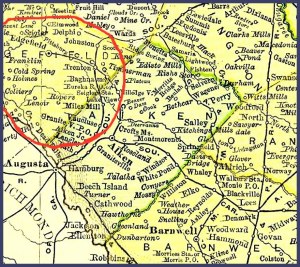 By the end of the first decade of the Nineteenth Century, Abner Landrum was manufacturing large amounts of stoneware on his property 2 miles north of the Edgefield Courthouse which became known as Landrumsville or Pottersville.

A number of skilled craftsman and slaves lived there. His brothers, John and Amos, were making stoneware a short distance away on Horse Creek. It was in these early stoneware factories that the third important element was added to the Asian-European ceramic fusion that Landrum discovered: African-American slave labor. Some 25 or so stoneware factories soon followed in the Edgefield District, most utilizing slave labor. 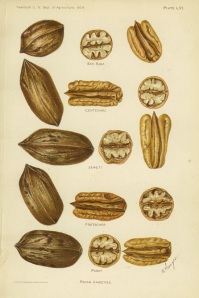 As early as 1820, Dr. Landrum was also experimenting with horticultural endeavors. He is credited with the first successful grafting and budding of a pecan tree. He took the small, insignificant native pecan and was able to graft it on to the hardy stock of native hickory trees (American Farmer4:7 1822) and start what would later become a huge pecan industry in the southern United States.

Abner Landrum inherited a young slave by the name of Dave. In the early decades of the 1800’s, Dave worked for Landrum at an Edgefield newspaper that Landrum published called the Hive. The Hive was a Unionist-slanted publication which was undoubtedly out of step with the views of the growing Edgefield planter-class. The Hive also carried articles on science and the arts. It seems through Landrum’s kindness, Dave developed into a literate, free-thinking, skilled craftsman who not only worked at the Hive, but also learned proficient skills in stoneware turning at Pottersville.

Dave is now world-known for his masterful, large stoneware vessels, many inscribed with contemplative couplet poems he penned on the surface of the wet clay pots. 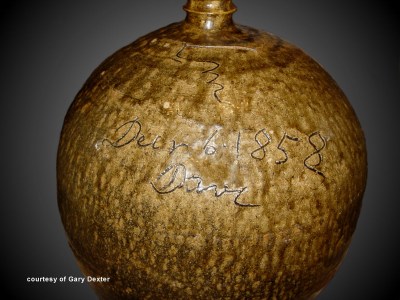 In a time where it was illegal for slaves to read and write, Dave managed his stylus with impunity, signing and dating his often mammoth-sized pots with his name, Dave. Clearly, Abner Landrum empowered Dave with education and exposed him to lofty ideals through his work at the Hive. Dave’s pots were shipped around the state to prominent citizens of the time. Dave’s pots now reside in prominent collections and museums.

The heat of politics evidently became too much for Dr. Abner Landrum in his hometown of Edgefield. He was persuaded by a Columbia, SC group of Unionists to relocate there in about 1830. He started another publication there called the Columbia Free Press and Hive. In addition, he embarked on another manufacturing concern in what is present-day Forest Acres in greater Columbia called Landrum Brick and Pottery on Bethel Church Road. There he settled and built his home. This home is much modified, but still standing today.

Landrum started producing firebrick for fireplaces, boilers and the great furnaces of the growing industrial south. He also produced alkaline glazed pottery for Columbia and for shipment around the south. His son, Linneaus Mead Landrum was active as a stoneware potter and helped run the Forest Acres business. Abner’s daughter, Juliette, married John James Stork of Columbia who took over the brickworks after Abner Landrum’s death in 1859.

Their children, Edward Leslie and Robert Manning Stork eventually renamed the brick factory in 1911 to the R. M. Stork Brickyard, where it persisted until 1970. The Brickyard Condominiums were built on the old brick factory site. The original chimney of the Landrum factory is encased inside of another chimney built in 1935 and has a granite memorial marker at its base on the condominium grounds.

Edgefield became a training ground for this unique alkaline-glazed pottery tradition. Dr. Abner Landrum’s alkaline glazed pottery spread through the entire southern tier of states as far west as Texas during the late 1800’s, providing millions of safe utilitarian pots and saving countless agonizing deaths among the southern populace due to lead poisoning. In isolated pockets throughout the south, this method of pottery production passed from generation to generation of potters up until the 1970’s.

As the world learns of Landrum’s great experiment in ceramics, it seems to be the surviving work of the enslaved potter Dave, (who latter took the last name of Drake in honor of his first master), who is perhaps its best ambassador. The volume of Dave’s work stands as a testament to brilliant Dr. Landrum’s benevolence and sense of justice. Dave’s work must be interpreted and understood through the context of his beloved master and friend, Dr. Landrum. Dave perhaps gave insight into his feelings by penning this April14, 1859 poem on one of his pots:

When Noble Dr. Landrum is dead, May Guardian angels visit his bed. 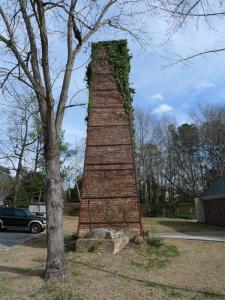 Brick chimney (above) and monument (below) from Landrum Brick & Pottery and R.M. Stork Brickyard

Gary Dexter looking out the loading door in the fire pit of his groundhog kiln.